The Panasonic P101 from Panasonic was launched on April, 2018. Price of this model is Rs. 4500. This Phone is powered by MediaTek MT6739WA processor and this phone has 2 GB RAM with 16 GB Internal Memory. This phone comes with 4G & 3G connectivity. Panasonic P101 runs on Android v7.1. It has 8 MP Rear Camera with LED flash and 5 MP Front Camera without flash.

The Panasonic P101 from Panasonic was launched on April, 2018. This mobile is currently available in stores like Amazon and Flipkart to purchase, with best price of Rs.4500. You can visit the stores below to purchase the phone. 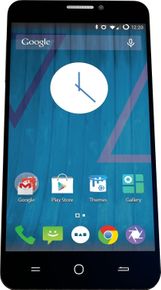 This model features Android v7.1. This mobile has 2500 mAh Non-Removable Li-ion Battery. This model has Dual Sim and there are dedicated slots for each SIM. This model weighs 145 g and measures 72 x 148.8 x 9.1 mm (height x width x thickness).

There is 8 MP Rear Camera in Panasonic P101 with LED Flash and AutoFocus. There is 5 MP Front Camera but without Flash. The camera also supports HDR, Panorama.

There is 1.3 GHz Quad Core MediaTek MT6739WA processor running in Panasonic P101. If you want to play high-end games or run heavy applications, this phone will not be suitable as it has only 2 GB RAM. The phone comes with 16 GB Internal Memory which might not be enough: to store your long playlists or favorite games.

The phone has 3G , 4G and Volte connectivity. Among other things it has Bluetooth , WiFi. GPS (Global Positioning System) is also available.

Q. Does this model has Front Flash?
A. No, This mobile doesn't have Front Flash.

Q. What is usb type of Panasonic P101?
A. This phone has microUSB.

Q. Which operating system this phone comes with?
A. It has Android v7.1.

Micromax Yu Yureka Plus
vs

Panasonic Eluga A2
vs