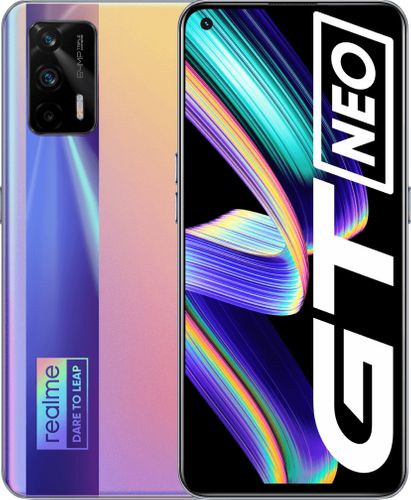 Realme released its Realme GT Neo on March 31, 2021. Expected price of this model is Rs. 19990. This Phone is powered by MediaTek 1200 processor and this mobile has 6 GB RAM with 128 GB Internal Memory. This phone comes with 4G & 3G connectivity. Realme GT Neo runs on Android 11. This phone has 64 MP + 8 MP + 2 MP Triple Rear Camera with Dual LED flash along with 16 MP Front Camera without flash.

✓ The highlight of this mobile is 3 GHz CPU Speed which is great in this price range.

Realme released its Realme GT Neo on March 31, 2021. This model will be coming soon in the market, its price is expected to be around Rs.19990. Keep checking us for the latest price updates of this phone.

It comes with Color Super AMOLED screen with resolution of 1080 x 2400 pixels. The phone has a screen size of 6.43 in with capacitive touch screen. It has display density of ~409 PPI (Pixels per inch).

There is 3 GHz Octa Core MediaTek 1200 processor running in Realme GT Neo. If you want to play high-end games or run heavy applications, this phone will be suitable as it has 6 GB RAM. The phone comes with 128 GB Internal Memory which should be enough to store your long playlists or favorite games.

Q. Which processor powers Realme GT Neo?
A. This Phone is powered by MediaTek 1200 processor.

Q. Does Realme GT Neo has fast charging?
A. Yes, This phone has 50W Fast Charging.

Q. What is the battery size of this phone?
A. This mobile has 4500 mAh Li-Po Battery. 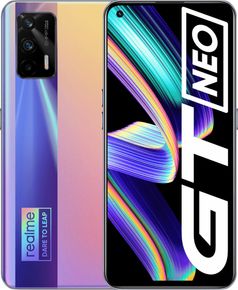